Fishing on the Cumberland River has been good and well, I might say interesting. There’s been a ton going on with the river and I’ll try and lay it out here for you below. I guess the big thing on everyone's mind has been the generation schedule. It’s that time of year where COE / TVA typically ramp up their release schedule. Usually weekend schedules are pretty fisherman friendly, but recent schedules have placed the utilization of (2) generators and a sluice gate as operating for 24 hours a day for several days including a recent weekend. This caught lots of people off guard, including me. However, I learned a long time ago that Cumberland River generation schedules can and will from time to time be baffling.

The simple biological fact that dissolved oxygen is vital for the hatchery and trout within the river to flourish can’t be disputed. In fact, oxygen is needed by almost all algae and other organisms which use their chemical reactions to keep a sort of balance within the lake. The interaction of oxygen during photosynthesis, decomposition, water temperature, gas saturation along with many other processes all form a cause and effect relationship with the formation and use of dissolved oxygen. Sunlight, wave action and weather also contribute to dissolved oxygen formation. Of course a low dissolved oxygen content effects growth rate, feeding habits and overall fish health within not only the lake, but also the river. Since the intake for the hydropower turbines is located at elevation 622' - currently about 92' deep in the lake, the water being released from the turbines is very cold, but also low in dissolved oxygen concentration. This is the problem. Right now, the balance between an acceptable dissolved oxygen level within Cumberland River and an acceptable generation schedule for power generation and lake lowering effects regarding Lake Cumberland is an issue that a lot of intelligent people and agencies are working together to solve. In order to meet state mandated dissolved oxygen concentrations, the COE supplements turbine releases with sluice gate releases. Although the sluice gate also pulls water from deep in the reservoir, the violent and turbulent act of water passing through the sluice gates aerates the water from a dissolved oxygen concentration of about 0.1 mg/L to about 10.9 mg/L. Ron Brooks, Director of Fisheries, fished this past weekend and took temperature/dissolved oxygen reading while he was there. He measured DO from the sluice gate when it was the only thing running and got a DO of 10.9 mg/L. The COE sent out the latest profile data yesterday and DO is essentially zero at the sluice gate depth which is at elevation of 562 ft or about 153 ft deep at current lake elevation.

The drawback however, is that sluice gate releases offer no power generation for the COE / TVA. So, in effect COE / TVA are getting zero return from the sluice, but our trout are getting a big shot of life sustaining dissolved oxygen.

Sluice gate in operation at Wolf Creek Dam putting out plenty of dissolved oxygen There are 6 generators at Wolf Creek Dam. Currently 3 of the 6 have been modified with hub baffles on the turbines and an auxiliary air supply that helps to add some level of dissolved oxygen to the turbine releases. Because of this, the COE typically restricts generation to only three units in the late summer and fall (units 1, 3, and 5). The discharge from these three generators currently has a dissolved oxygen level of around 4.0 mg/L. The DO level of water from turbines 1, 3, and 5 is all the same because they all have the hub baffles and venting. DO from turbine generation is lessened only when they start adding release from any of the remaining 3 that don’t have hub baffles. From a sluice gate, it's around 10.9 mg/L. The state standard in Kentucky for a cold water fishery is a 24 hour average of a minimum of 6.0 mg/L and an instantaneous minimum of 5.0 mg/L.

So what is happening with the generation schedule? The COE / TVA , Kentucky Department of Fish and Wildlife Resources (KDFWR) and Kentucky Division of Water (KDOW) have had recent emails and conference calls trying to figure out how all parties can have their needs met. The current standing is that the COE / TVA will be running 3 units + 2 sluices 24x7 during the week. Then Friday night, close a sluice. Saturday and Sunday will have release from only a single sluice (no generation) from 0400-1200.

There are current requests for further adjustment on the weekend schedule and ask for going to zero at midnight to hopefully allow for lower flows further down river than last weekend. This allows the COE / TVA more water during the week while allowing for fishermen to have a good release pattern for weekends during the day.

There is always the possibility that the release schedule may change without any notice. Please pay attention to your surroundings while on the river and be aware that conditions may change at any given time. Hurricane Harvey may also become a factor with future release schedules.

As a guide I appreciate the willingness of the COE to work with local and state officials to ensure the high quality of Cumberland River trout is maintained. I also accept that due to generation schedules, this may affect me economically as a guide. However, I would much rather see the Cumberland River tail waters thrive and flourish due to good dissolved oxygen content rather than see poor fish health as a result of low dissolved oxygen.

So, what’s been working? I’ve been guiding with jigged woolly buggers, San Juan worms, Apricot egg patterns, squirrel tail nymphs and various streamers. All have been putting plenty of fish in the net. I actually fished myself Sunday and witnessed my buddy get a get a great take on a hopper. Try em if you get strikes on your indicator.

I want to throw a big ‘Thank You’ to Robert Dillingham PE Civil Engineer (Hydraulic) with the US Army Corps of Engineers, Dave Dreves Assistant Director with the KDFWR Fisheries Division, Marcy Anderson KDFWR Southeastern Fishery District Manager, and all the other people and agencies working to keep our fishery in top notch shape. I recently asked plenty of questions to each of those listed above and they were all great at giving dumbed down answers to a pretty simple minded guy when asked about reasons for generation and the intricacies of monitoring dissolved oxygen and how it affects the trout we all so love to catch.

I hope I’ve helped clarify some of the confusion I’ve been hearing about the river and generation schedule postings.

Thanks for all of you that keep up with my few and far between fishing reports and sporadic social media posts. If you want to fish the river, right now is a great time as bigger fish are being caught and the fall spawn is right around the corner. Give me a call, text, or e-mail any time.

Thanks and fish hard! 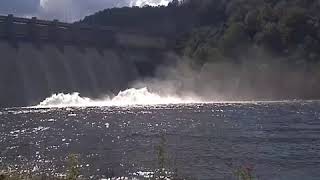